Subscribe to receive industry news and valuable insights directly to your inbox.

Amazon is being hailed as a champion for worker’s rights this month because they increased their minimum wage to $15.00 per hour for their warehouse workers. The retail industry, like many other blue collar industries, have been facing mounting pressure regarding wages for years. It’s no surprise that Amazon’s announcement was initially met with cheers from worker’s rights groups but does Amazon really deserve all the credit it’s receiving?

The Amazon effect on wages

Typically costs increase with demand. So one could assume that with the explosion of ecommerce and the increasingly worrisome lack of warehouse labor; wages should be increasing. Typically when a new business opens in the area they may offer a higher than usual wage to attract away the best talent. However this is not the case for businesses as large as Amazon because when you are this big, you make your own gravity and the usual rules are not applied to you but changed by your presence. 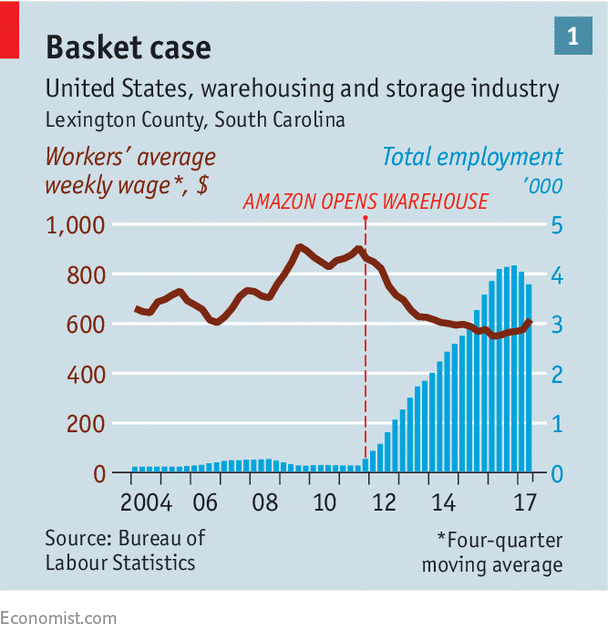 According to government statistics, warehouse wages drop by 3% when Amazon opens a new facility in an area. Some areas have seen alarming drops in wages. For example, in Lexington County California, warehouse wages dropped 30% after Amazon opened a new facility there. Additionally, wages dropped 17% and 16% in Chesterfield Virginia and Tracy California when Amazon moved in. In areas where Amazon operates, workers make 10% less than similar workers employed elsewhere.

Although the $15.00 per hour minimum wage increase makes for a great headline, it actually falls short of many other 3PLs. The fact of today’s warehouse labor market is that available labor is becoming more and more scarce. Ecommerce grew at a rate of 16% in 2017 and it isn’t showing signs of slowing. The increased demand to ship more products is met with an increased demand for labor. This competition has been driving up warehouse wages to above $15.00 per hour in some areas for years now.

Even with this increase it is a very real possibility that Amazon’s decision to raise the minimum wage of their employees may end up saving them money but hurting their employees. In addition to increasing wages, Amazon cut two programs that Amazon employees have loved, (well and loathed but more on that in a moment) their stock awards and monthly performance bonuses.

Each Amazon employee was granted 2 shares in Amazon when they are hired and an additional stock option each year ($1853.64 per share at the time of writing). Amazon’s stock has been growing year over year and represented a large amount of compensation. Amazon employees also used to have a variable compensation plan or VCP for short. The VCP would allow them to earn more pay based on the performance of the fulfillment center and their personal productivity. Typically, Amazon warehouse employees saw a large pay bonus in the holiday frenzy of Q4 each year.

Throughout the year, Amazon employees could earn an additional 8% of their pay and 16% of their pay in Q4. Amazon says that its employees will enjoy the more predictable pay over the greater potential. However, many employees stand to lose thousands of dollars due to the change in compensation. Additionally, this wage increase will not affect the thousands of contract and temporary workers that Amazon hires.

The point is, Amazon has historically caused a net negative affect for warehouse worker wages when they enter an area. They have been plagued with turn over issues and worker’s rights complaints for years now and this increase was an inevitability. Natural pressures were already pushing Amazon and all companies with warehouses to raise wages. So this increase is not so much a heroic act as a well spun, calculated profit move. Amazon needed good press to counter all of the negative videos and stories coming out of it's warehouses lately. This accomplished that goal while coming before this year’s fourth quarter when they would need to potentially pay out that 16% wage bonus.